In May 1944 the Batlow Agricultural Bureau held a Pioneers Night. The idea was conceived by George Keenan, son of Aaron Keenan and Elizabeth Jane Morton, and grandson of Henry John and Nancy Jane Keenan. The function was held to honor "some 20 or more of the district's pioneers ... by entertaining them at a picture show and supper". George Keenan was President of the Batlow Agricultural Bureau. Each year since then a Batlow Pioneers' Night has been held in Spring (October). Naturally, the activities and procedure on these evenings have changed over the years. Reports of these events appear in newspapers of the times, many of which have been digitised by the National Library of Australia and are searchable on its Trove website. I was fortunate to be able to attend a Pioneers' Night with my father, Wilf "Wis" Keenan, in the 1990s.

Henry John Keenan and Nancy Jane (Ann) Keenan (nee Gamble) from Glenone, County Derry, Northern Ireland, settled in Batlow (then called Reedy Flat) in about 1870. (They had lived nearby in Bombowlee before that.)"The site of their early Batlow home was where the orchard of Bowman & Sons now stands, and here eight more children were born, making the total family five daughters and six sons." - see1949 article by grandson, George Keenan, which appeared in the Tumut and Adelong Times.  (This area is at the southern end of Batlow.) Note by Peter Keenan (Sept 2016): Henry purchased the property referred to in 1871 and sold/transferred it in 1878. Four of his children were born during this period. It appears that he and the family then moved a little further away, where another 3 children were born.

I have marked this topographic map from 1977 to show where the Keenans lived.  The first home was on 2 acres of land in what is now know as Mill Road, Batlow (opposite 103 Mill Road). 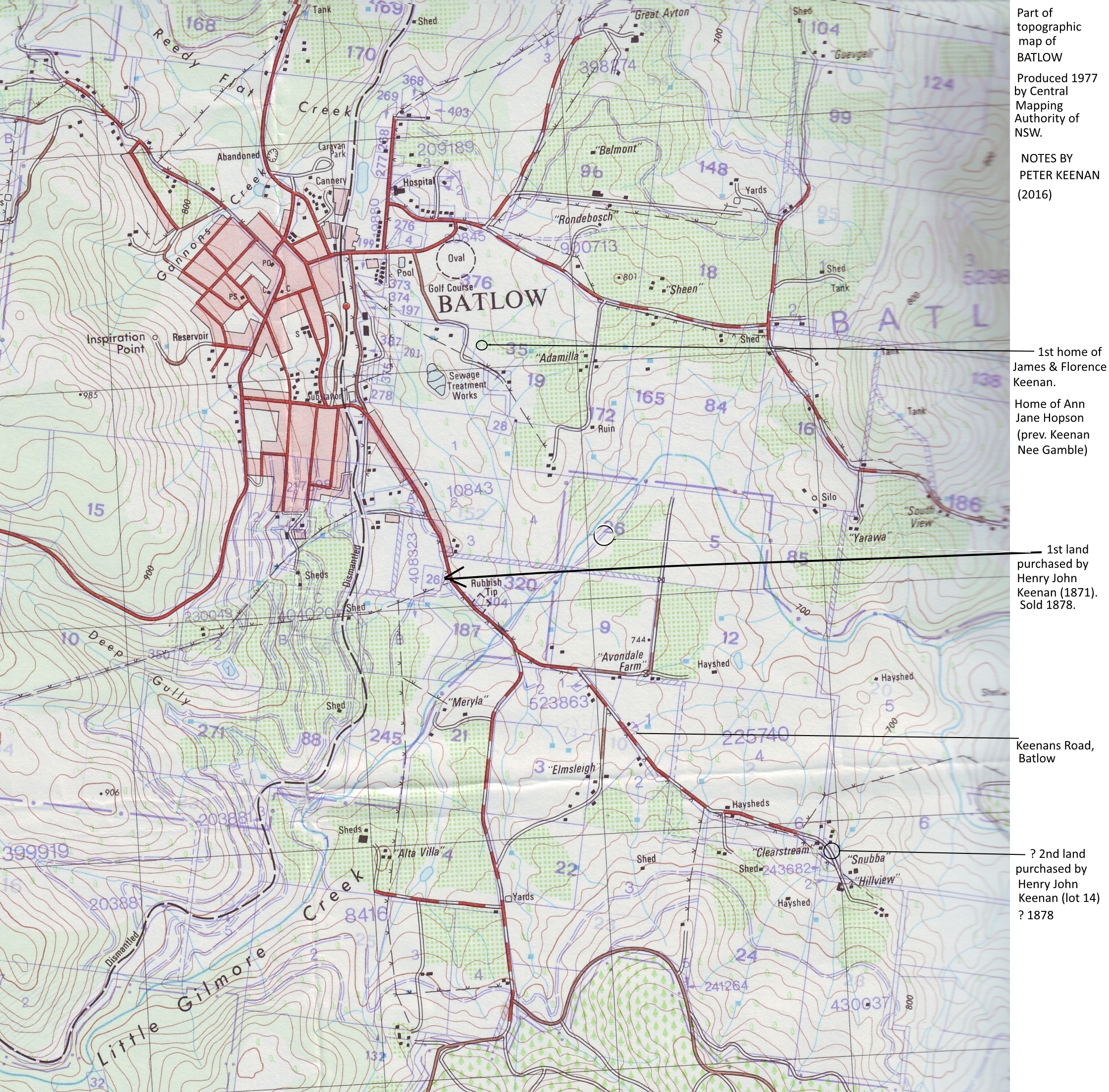 These other maps give more information:

It is in this area that a road has been named Keenans Road (see maps above), so named because of the pioneering role that Keenans played in the establishment and development of Batlow, and because the farming property at the far end of the road was owned by Keenans.

According to the 2008 electoral roll, Kenneth Neville Keenan  resides at a property known as "Hillview", which is at 180 Keenans Road, Batlow.  (Ken is apparently the great-great-grandson of Henry John Keenan: i.e., Henry John Keenan (1842 - 1889) > Aaron Keenan > Stuart James Keenan > Neville Stuart Keenan > Kenneth Neville Keenan.) Internet searches of Real Estate firms indicate that this property is up for sale, although they state that it is a 0 Keenans Road, Batlow (October 2008). Advertisements describe the property as follows:

"HILLVIEW": Magnificent lifestyle block with mature orchard. The orchard consists of over 3250 mixed variety apple trees, the majority of which have hail netting. The land ranges from gently undulating open cleared grazing country through to semi-cleared regrowth grazing running to steeper timbered ridges. Water is a feature with about 1.2km of frontage to the Gilmore Creek with one of the best fishing & swimming holes in the district & a 6 hectare irrigation license. Power is on site & there are several superb home sites on the property making this the perfect getaway.

Click HERE for photograph of Peter Keenan and his children at Keenan's Road, Batlow, January, 1993.

Sometime after the death of Henry John Keenan in 1889 , Nancy Jane (Ann) Keenan [who married again and became Ann Hopson] acquired a 40 acre property in another part of Batlow, near the golf course and below farming property named "Adamilla".  She shared this property with her oldest son, James, and his wife Florence (my grandfather and grandmother). Later it was owned by James and his brother, Stuart Gamble Keenan. Later it was owned by Hector Keenan, a son of James Keenan.

An Addresses Register produced by the NSW Electoral Commission in January 2008 shows:

SONG TO THE PIONEERS

Now come all you people of Batlow and listen and heed what I say,

About all the well known identities who are gathered here today.

There are Keenans and Barbaries and more.

They are pioneers of Batlow, who did all the hard work before.

They started this town from nothing, with bullock teams, axes and saws,

The sweat and the curses and swearing, helped many a man through his chores.

The early settlers came flocking for the gold in the cold mountain streams,

And suffered torment and hardship in search of a golden pipe dream.

The gold rush soon it was ended, many settlers departed this land.

The few that were left with their visions started a pioneer band.

They saw in this beautiful valley a future in apples and pears,

And made from the virgin rain forest, a land that would always be theirs.

For many long years they laboured, their names increased by the score,

And many the deeds they accomplished with axes and cross cut saws.

So today all you people of Batlow who live in the ease of the time,

Take pause in your daily devotions and remember your pioneer line.

[Note:  I do not know who wrote these words. It appears that they were written several decades ago, when admiration for the pioneers was at its peak. Peter Keenan.]