Residence/s:
When Ann and Henry first arrived in Australia they lived in Maryborough, Queensland. It is not known how long they stayed there, but it appears that by a few years later they had made their way south to the Monaro district of New South Wales and then on to the Tumut/Bombowlee/Reedy Flat (Batlow) area to try gold mining.  It is said that when they first arrived in this area they stayed on property in Bombowlee owned by the Morton family.

After selling that property, Henry and Ann acquired - on 2/2/1882 - 40 acres of land situated on the south side of land which later became the golf course. (A map is shown on the page for Henry - Henry1842.htm.) In 1908 this land was officially registered as belonging to Ann (who by then was Ann Jane Hopson,  widow ). The details of the land are Portion 19, Registered No. Fol.1898 Vol.147.  It appears that two of her sons - James Keenan (b.1864) and Stuart Gamble Keenan (b.1885) - had established an orchard on the land and were living there with Ann. In December 1913 Ann transferred this land to those sons.  In June 1936 they divided the property in two. In December 1937 Stuart transferred his portion to Robert Morton.  In September 1939 James transferred his portion to his son, Hector Keenan. In 1941 Hector "took back" Stuart's portion by leasing it from Robert Morton.

Ann moved from the 40 acre property in 1924 to go into a nursing home in Sydney, near to the home of her son John Keenan. It appears that Ann occasionally stayed with John and his family when they lived in Batlow.

Remarried:  Nancy/Ann married Robert Hopson of Batlow on 14 July 1892.(From the Register General's General Index of Marriages registered in NSW during the year ended 31/12/1892, page 494, number in register 2426.) (The witnesses were her son, Aaron Keenan, and his wife Elizabeth Jane Keenan.) Robert Hopson died on 14 March 1903, aged 65. Reg No. 781. (From NSW deceased estate index item 19/10216). An application for Probate was notified on 8/5/1903 by executors George and John Mouat. (The Tumut and Adelong Times, 8/5/1903). His father's name was James Hopson.  (From Index to Deaths, NSW, 1903, number in register 781)  Robert Hopson owned land on Bank Street, Batlow (From map in "Batlow & District in Pictures", page 46.) Land title records suggest he also owned other land. (I do not yet know what happened to this land when he died.)
Children from second marriage: None

Correct name Granny Hopson, not Granny Hobson: In some history books and articles Nancy Jane is referred to, after her second marriage, as "Granny Hobson".  However, this is not accurate, because her actual name was Hopson (i.e. spelt with a "p" not a "b"). The name Ann Jane Hopson appears on her gravestone in Sydney - see PHOTO taken circa 1944.

Deceased:  7th December 1926 in Sydney, NSW. (Her death registration number is 18697/1925 - Ann J Hopson. The district is Marrickville.)  I have been unable to find any record of her Will, or any grant of probate of her Estate.
Buried:    Woronora Cemetery at Sutherland, an outer southern suburb of Sydney, NSW. Location: Presbyterian Monumental; Section: WW; Position: 0040.

Tales:  For stories about Nancy/Ann, see the page with the 1949 newspaper article about the Keenans of Batlow and, at the bottom of that page, an extract from the book "Batlow: The Growing Years From Gold to Apples (1975). On that page there is also a photo of her at the nursing home where she died.

Tribute: On 24 October 1924 this wonderful tribute or prayer (author unknown, but possibly George Keenan) was published in The Adelong and Tumut Express and Tumbarumba Post, on news that Nancy/Ann Gamble-Keenan-Hopson was ill:

"Her legion of friend's will regret to learn that Mrs. Hopson ("Granny") is having bad health. This fine old lady, who has been to the mothers of Batlow in the past an angel of strength and sustenance, belongs to an order of beings that is fading fast away. There has been no life more useful, and no two hands more capable than those of "Granny" Hopson, and we sincerely hope that the great courage and strength that carried her thus far through the years, will remain with her when she needs them most." (by "an occasional correspondent") 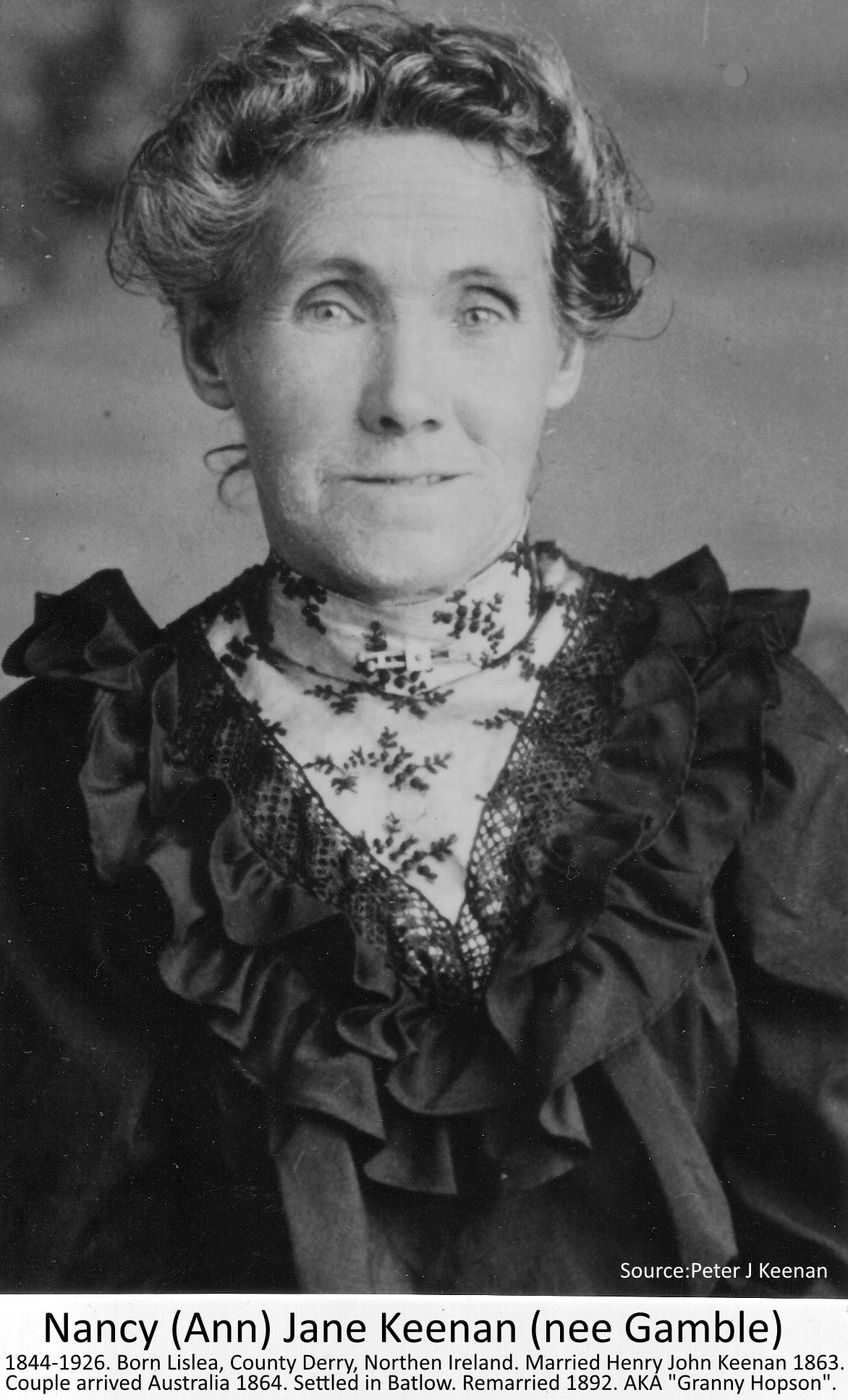 The original of this photo was found amongst the belongings of my father, Wilfred Walter ("Wis") Keenan (1910-1988). He was a grandson of Nancy Jane Keenan and, when a child, lived near her in Batlow, NSW.

Another copy of the photo is in the possession of JOHN KERR of Coleraine, Northern Ireland. John is a grandson of Elizabeth Kerr (nee Gamble), the sister of Nancy Jane Keenan. I took photos of the front and back of his copy when I visited John in August 2018. Written on the back is his photo is this message from Nancy Jane, known then (August 1916) as Ann Jane Hopson:

"To my dear sister, Lizzie Kerr, from Ann Jane Hopson, Batlow, NSW, Australia, August 16th 1916. This is a photo of me taken a few years ago. A.J.Hopson" 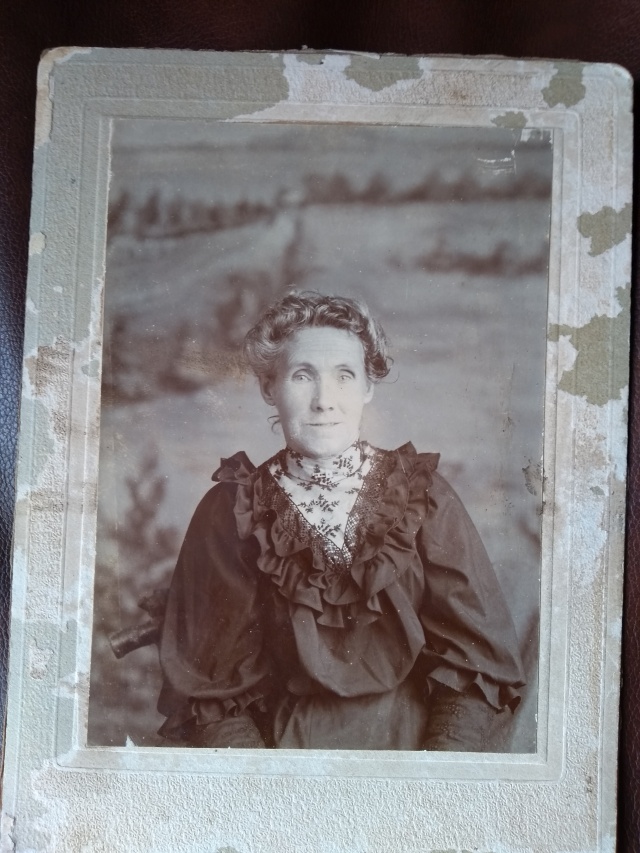 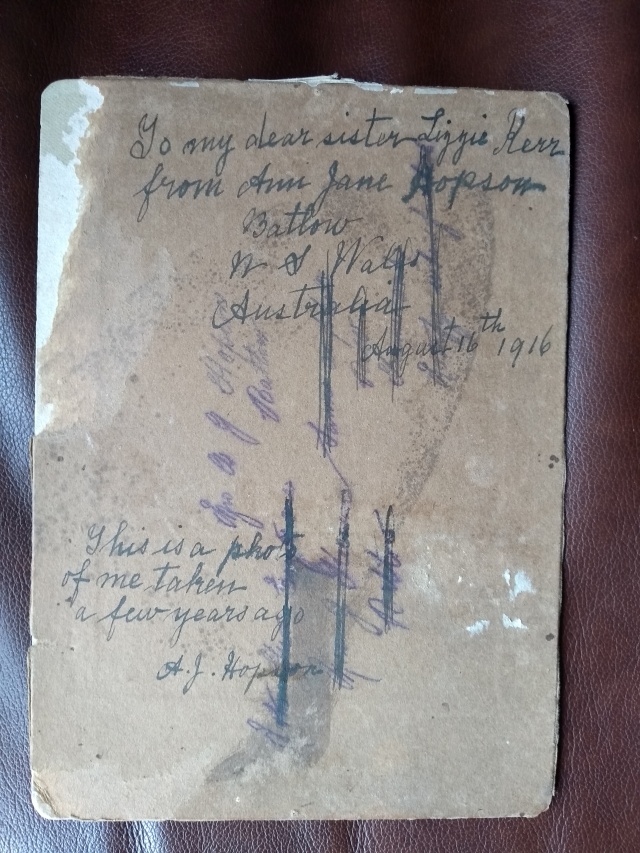 THE FOLLOWING INFORMATION ABOUT NANCY JANE'S ANCESTORS IS SUPPLIED BY MRS ANITA ARNOLD OF ENGADINE, NEW SOUTH WALES. THE NAMES WERE OBTAINED FROM THE "WILL" OF JAMES GAMBLE. SOME INFORMATION ALSO SUPPLIED BY JOHN KERR OF COLERAINE.

See also the family tree in THE GAMBLE FAMILY IN NORTHERN IRELAND.  Note: John Kerr of Coleraine, Northern Ireland, is a Gamble descendant and has made a detailed study of the Gamble family. Although in some instances he is not certain of the facts, his information differs somewhat from that shown above. John has shared his information with me. From that I am preparing another flowchart which I will place on this website.

the following information regarding the marriage in 1831 of nancy Jane's parents comes from  http://www.torrens.org.uk/Genealogy/BannValley/church/KilreaP1/Marriages/1831.html :

the following information regarding nancy Jane's baptism come from

There were several Gambles living in Lislea at around this time.  The Griffiths Valuation of 1848 to 1864 records the following property owners named Gamble in the Townland of Lislea, which is in the Parish of Kilrea in County Derry:

Note: Irelands Valuation office conducted its first survey of property ownership in Ireland from 1848 to 1864. This survey became known as "Griffiths Valuation" after Richard Griffith who was the director of the office at that time. The survey was used to determine the amount of tax each person should pay towards the support of the poor within their poor law union. This involved determining the value of all privately held lands and buildings in rural as well as urban areas to figure the rate at which each unit of property could be rented year after year. The resulting survey was arranged by barony and civil parish with an index to the townlands appearing in each volume. Griffith's Valuation can be used as an excellent census substitute for the years after the Great Famine as censuses prior to 1901 were destroyed.

The Marriage Certificate of Henry John and Nancy Jane Keenan 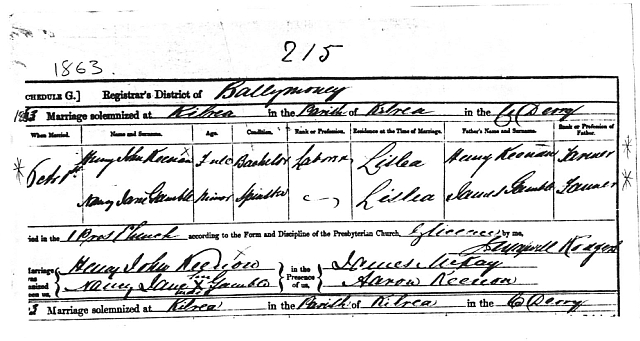 NOTE: Nancy Jane Gamble signed with her mark. Family historian Anita Arnold says "Granny made her mark on this certificate but in later life her grandchildren taught her to read and write". 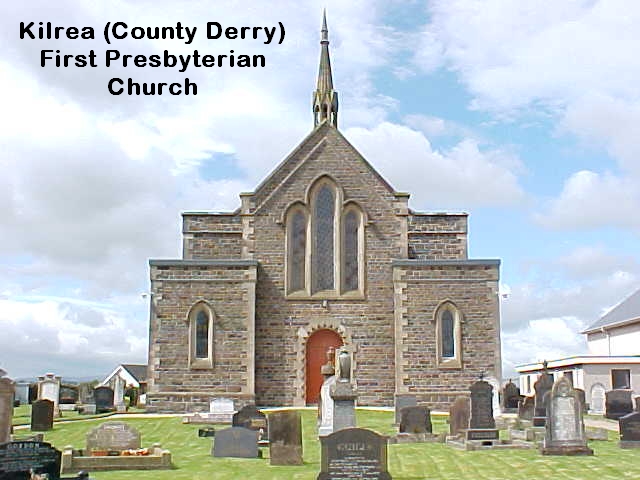 inside the Kilrea First Presbyterian Church: 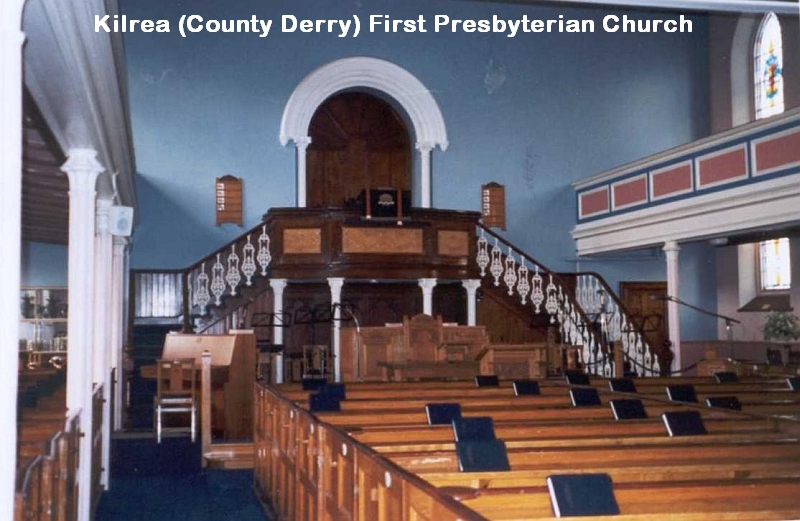 MAP OF THE WORONORA CEMETERY, SUTHERLAND, NSW:  Nancy/Ann is buried in the Presbyterian section, WW, position 0040. 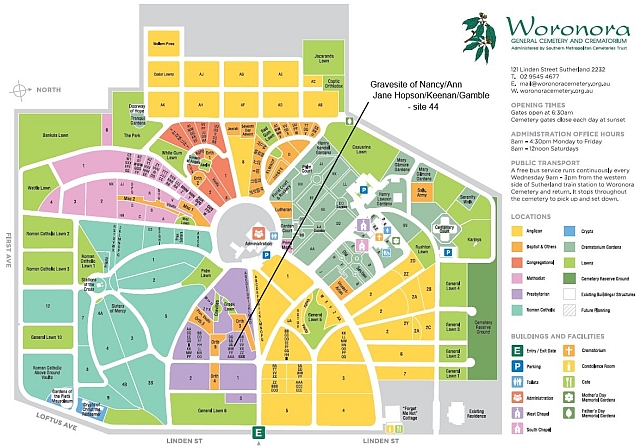