The following information about the Portglenone area was found at The IreAtlas Townland Database  at http://www.seanruad.com/

Glenone is the place where Henry John Keenan (b.1842) lived before leaving for Australia in 1863-4:

POLLING STATION used by Electors in the GLENONE AND INNISRUSH (or INISHRUSH) area is at St Mary's Primary School, Greenlough,

HOME OF KEENANS IN GLENONE 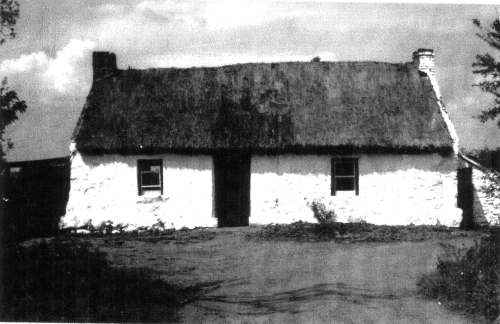 This is the early home of the Keenans  in Glenone, Northern Ireland.  Photo supplied by Anne Waghorn, of Australia, a descendant of those Keenan's who settled in Western Australia in the mid to late 1800s. The home in Glenone has been demolished.

I visited the site in 2018 (in the company of John Kerr of Coleraine, NI, a distant cousin on the Gamble side, and a person who knows the area and the people well). The site is at 57 Clady Road, Glenone, County Derry. (The entrance laneway is shared by both 57 and 59 Clady Road.)  John and I had a friendly chat with Mrs Andrews, wife of Robert Andrews, the current occupants. I took several photos of the site.

Before that, on a visit to the area in 2002, I was shown the site by Sheila Johnston (now deceased), a Keenan relative who was then living in Bangor, County Down, Northern Ireland.   According to Sheila "there is a bungalow there now (Sept 2011) where the old Keenan home was.  I think the man who lives there is a distant relative of Keenans". Sheila has provided me with a map with the site marked on it.  It seems to be located at 50 Clady Road, Glenone, County Derry; well back from the left hand side of the road travelling East towards Portglenone, about half way between Kirea Road and Ballymacombe Road. Subsequent research suggested the address might be 57 or 59 Clady Road, Glenone.

SEE ALSO MY PAGE HEADED GRIFFITH'S VALUATION BETWEEN 1847 AND 1864 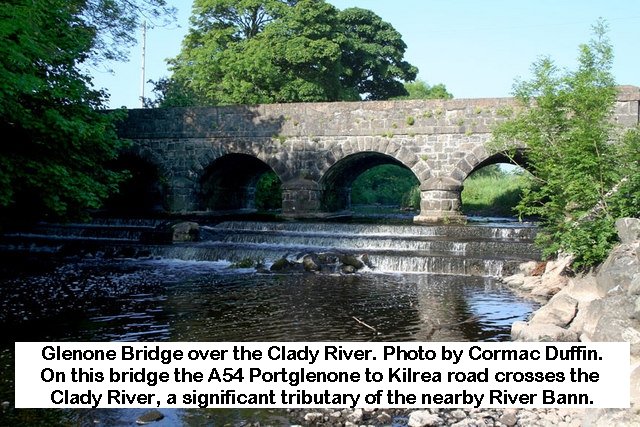 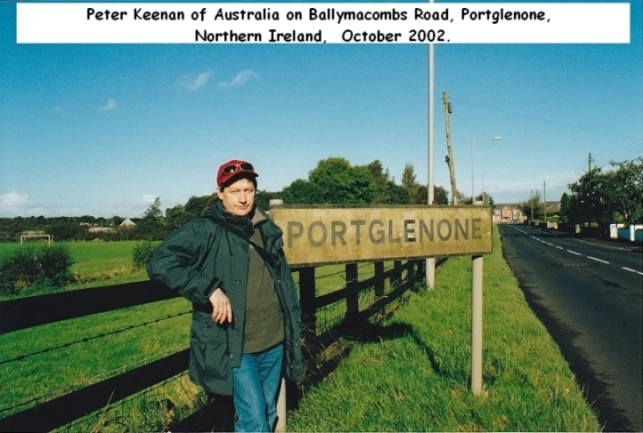 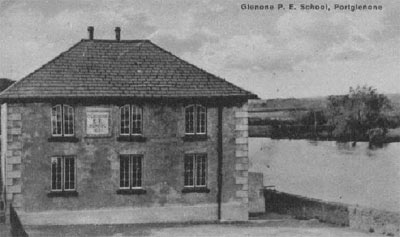 The photo above and the text below are from the website of the Parish of Greenlough, Tamlaght O'Crilly.  For more go to www.greenlough.com

The following description is from http://www.portglenonetourism.com/dir/tourism/heritage-trail/11.-glenone-national-school

Glenone National, (later Public Elementary), School was built in 1836, near Portglenone Bridge, on a site donated by Daniel Daly, a local merchant. A two-storey building, 31ft. by 20 ft., with walls 1ft.10 in. thick, it had a slate umbrella roof and was built of black quarry stone. It had one door, 10 windows and an 8-dayclock on the wall facing the bridge. There were two outdoor toilets and a small shed. Boys were taught in the lower storey and girls in the upper.

The total cost of the erection of the building was £155.75 and of this, the National Board contributed £103.85. The following are named as having given donations;- Rev John Rogers, PP of Tamlght £2; eight local merchants, W.H.Holmes, Daniel Day, John Daly, Sen., John Daly, Jr., Dr Heaney, Pat Mooney, John Hamil and James McEntire, all gave £1 each. The remainder, £36.90, was contributed by, "benevolent persons of all denomination, in sums equal to the circumstance".

Reproduced from "Making sense of it all" By Damien Clarke

The school, then known as Glenone Primary, closed in 1962. The teachers at this time were Mrs Maura Clarke (Principal) and Mrs Margaret Fox. Glenone School was demolished in 1986.

REGARDING HISTORY OF INNISRUSH

Extract from a "Quiet Places of the Lower Bann Valley" by John HUGHES and Donal BARTON. (circa 1998)

“In Co Derry across from Portglenone is Innisrush, named after an island that used to be in the middle of Green Lough (green lake). There was the residence of Hercules ELLIS, local landowners. It was once quite a thriving village. John CLEMENTS owned a woodworking business. The Green Lough which gave its name to the parish (Greenlough) has now disappeared, having been drained in the process of draining bogs in the late 1800's. However once there was an island in the middle of it and Brian CARRAGH built a castle on it and lived there till he died in 1586. He was the great grandson of Dumnhall Donn, Donnell the Brown, O'NEILL, who founded the sept clan Domhnaill-Duin-Na-Bana. He lived on the Antrim side but seized the O'Cahan clan's lands, which this was. Many tried to capture him but at this time the land was bog, water, and wood.”

The book mentioned above - "Quiet Places of the Lower Bann Valley" - has been published on the Kiwi Celts website (http://family.kiwicelts.com/21_Places_and_History/Quiet_Places_of_the_Lower_Baan.html#Cranfield ).  It mentions other sites and persons of historical importance, such as Clady, the Clady River and John Keenan, and has a number of photos of the Lower Bann area.  A copy of the book, without the hyperlinks, is also published on this site. To see my PDF copy CLICK HERE.  For my Word copy CLICK HERE.

"Although Greenlough parish has only two primary schools at present, in the past it could boast of several. No less than 20 schools are listed by the Commissioners of National Education, Dublin, for the parish of Tamlaght O’Crilly in their Report for the year 1823. The schools listed with their principals were:

The map and text below are from the website of the Parish of Greenlough, Tamlaght O'Crilly.  For more go to www.greenlough.com

The Townlands in Greenlough 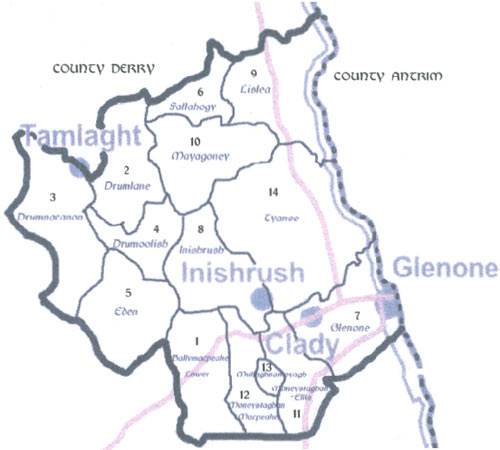 Townlands in our parish: 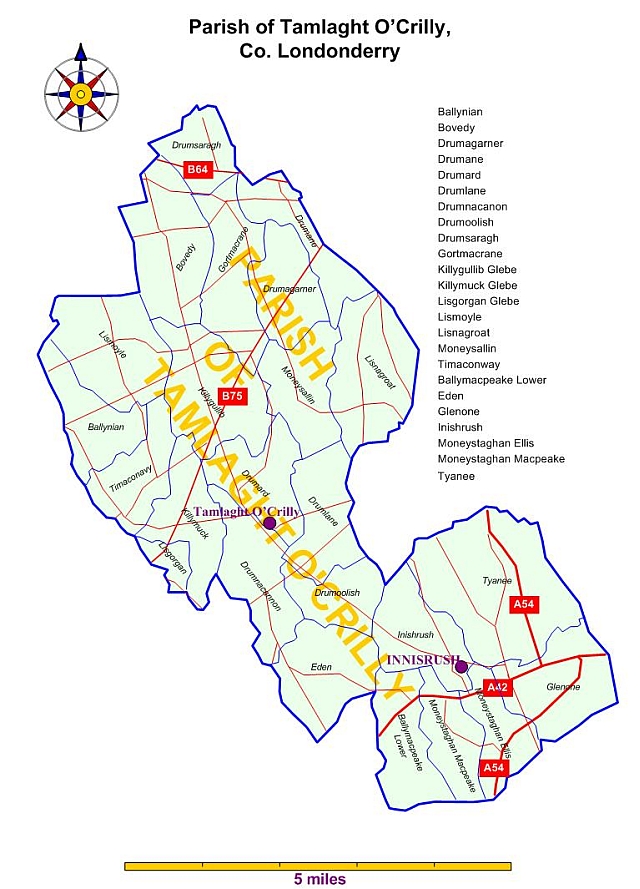 For an extract of the 63 Keenans in County Derry at the time, showing names, townland and parish,  go to http://www.failteromhat.com/griffiths.php and do a search.  The same type of search can be done for any County.

Henry Keenan of Ballybeg, Ahoghill, County Antrim, may also be an ancestor, as this area is close to Portglenone. 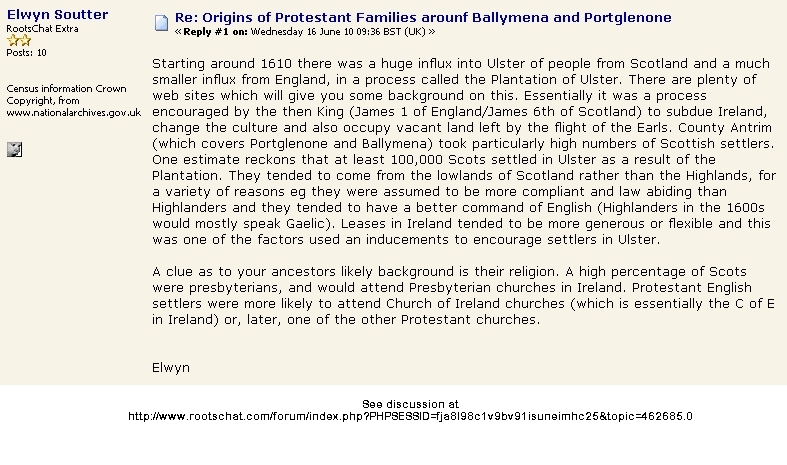 "Scanned images of Slater's Commercial directory of Ireland 1846.  These are in PDF format so that they can be more easily viewed. Please note these files are large. The average size is 250k. Slaters's directory goes through the towns of Ireland alphabetically. It lists a detailed description of the town or city, post office information and shows the names of nobility and gentry living in or close to the town. The traders of each town are arranged according to their trade." 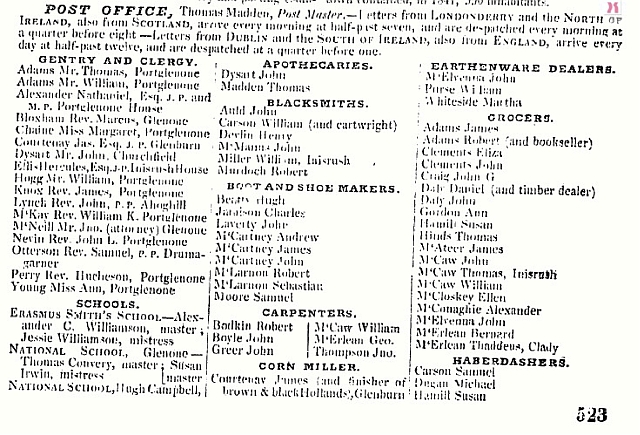 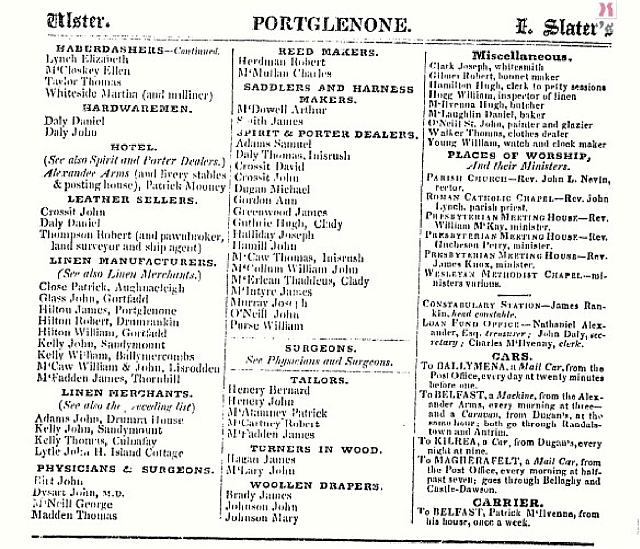 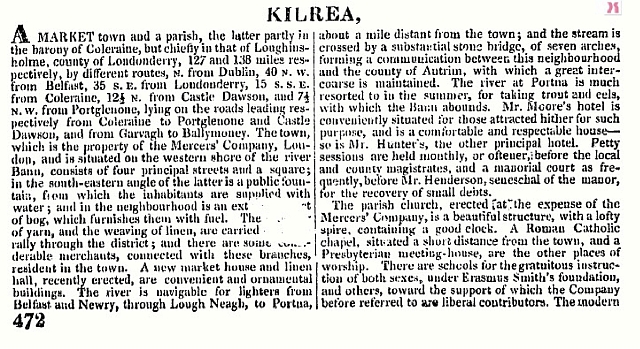 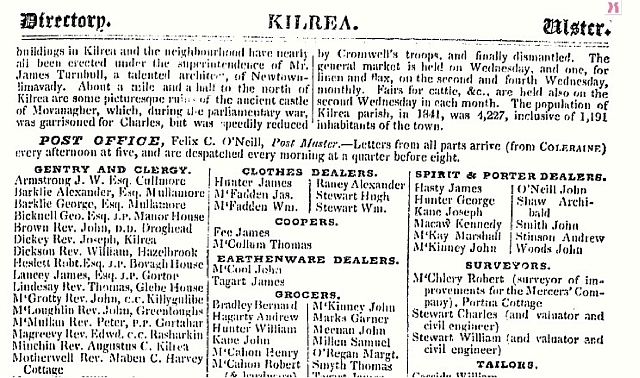 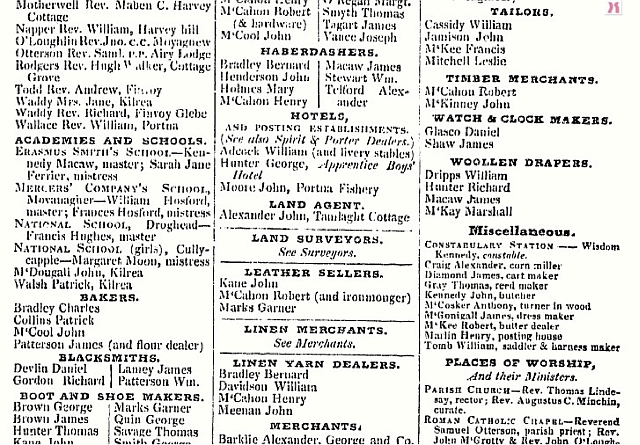 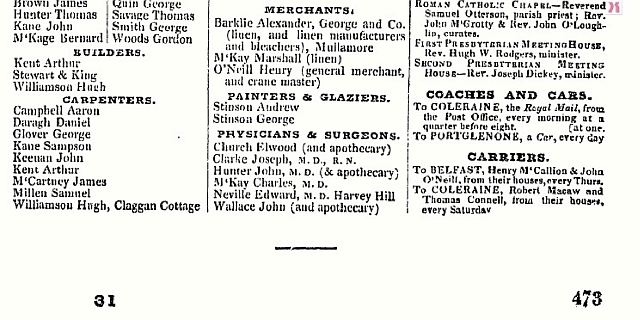 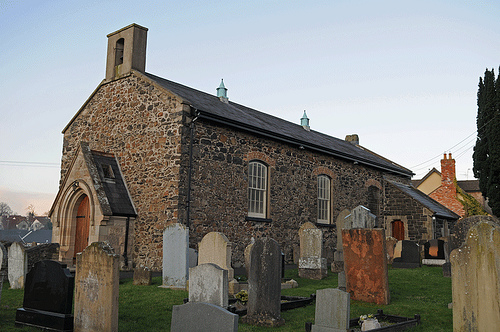 A Henry John Keenan and a James Keenan, who died in the 1700's, are buried here.  I have photos of the gravesites, taken while visiting in 2002.

The website of oneirishrover states that the two headstones read:  "Here lieth the body of Henry Keenan who departed this life in March the 15th 1784 aged 70 years. Also Henry John Keenan who departed this life 14 May 1886 aged 8 years". And  "In memory of James Keenan who died 12 June 1906 aged 60 years. Also his son Samuel, wounded in action, died and was buried in France 6th Sept, 1917, aged 30 years. Also his wife Mary Keenan, died 4th April 1934, aged 91 years and his grand daughter Margaret Bell Keenan, ..." (Note - the bottom section/words of this headstone is broken and missing).  This does not accord with what I saw when I visited that church graveyard in 2002. But perhaps a greater part of the headstone has been exposed since then. During 2020 I have corresponded with the author of oneirishrover (William Mulholland), but there is still some confusion and uncertainty.  It is quite possible that the Keenans buried here, in Portglenone, are from another branch of Keenan family:  for example, my research shows that the James Keenan who died in 1906 and had a son Samuel who was killed in France in 1917, was the brother of my Henry John Keenan. [Refer Tree HK1808 and Tree JK 1847.]

The following description is fromhttp://www.portglenonetourism.com/dir/tourism/heritage-trail/6.-church-of-ireland-parish-church

"Erected c.I735 by Francis Hutchinson, it became the parish church proper in 1840. Plain of appearance, the church is constructed of fieldstones. A tablet is erected inside the church to the memory of Dr Hutchinson, who is buried in a vault underneath the Sanctuary. Some of the old Communion service ware and a copper collection plate held by the church were gifts from St John O'Neill, who lived briefly in Portglenone Castle. He was an uncle of Lord O'Neill of Shane's Castle. 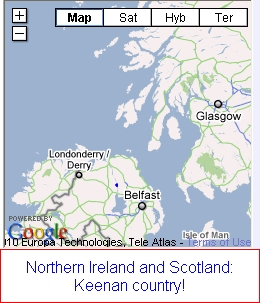 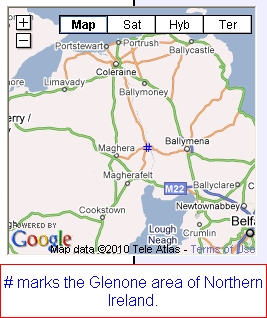 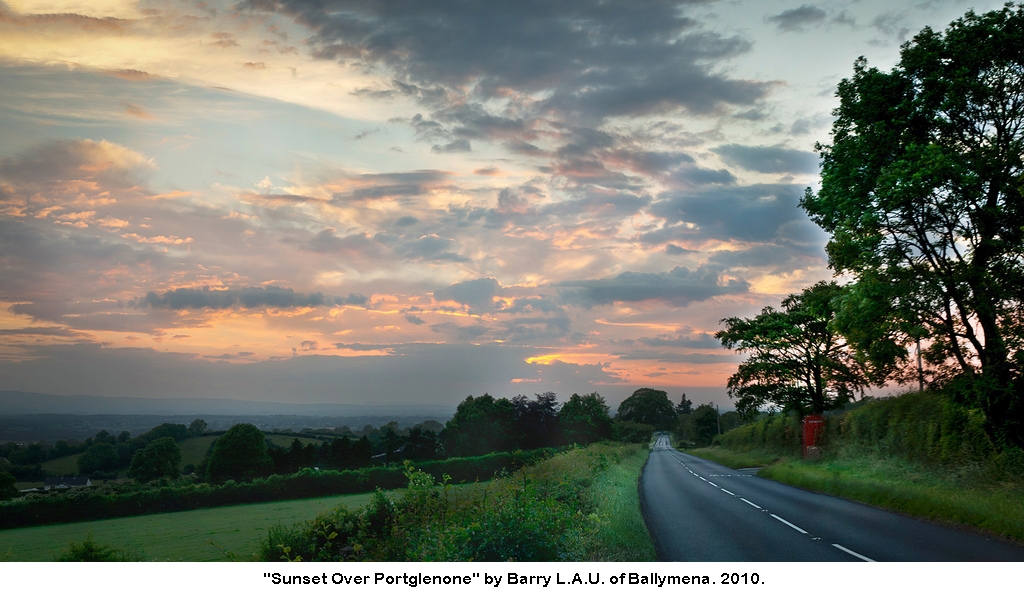 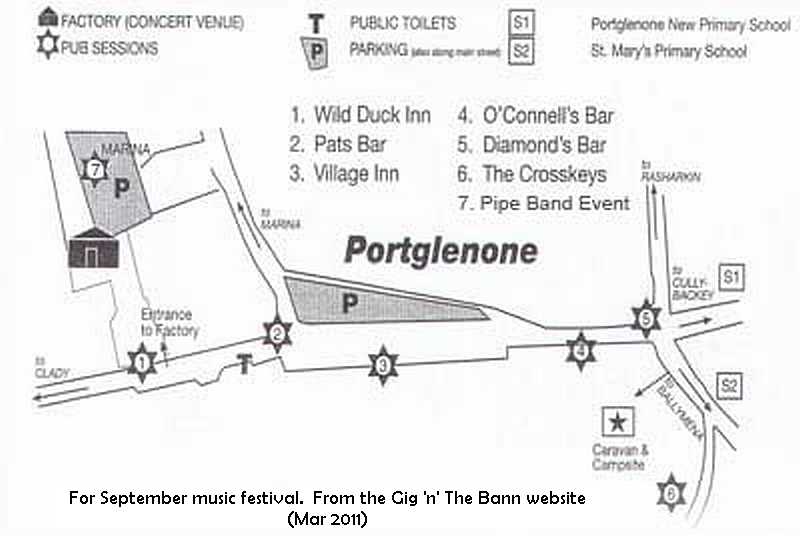 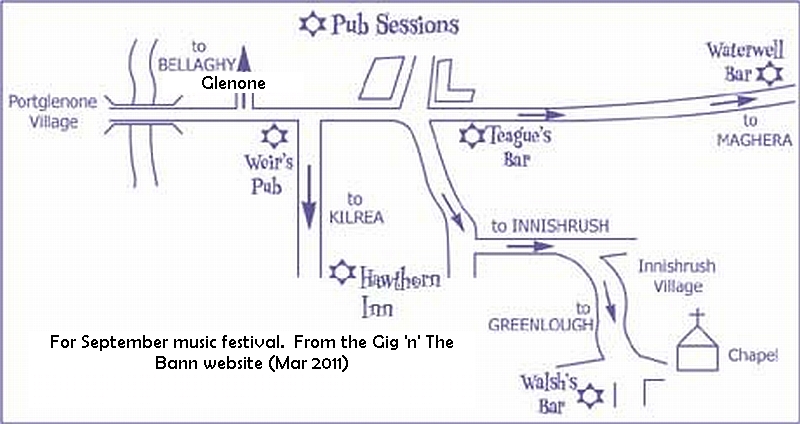 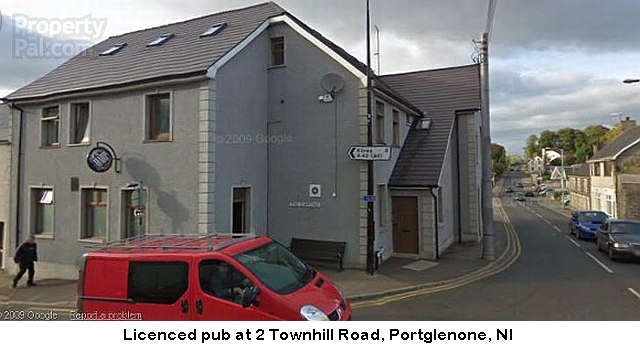 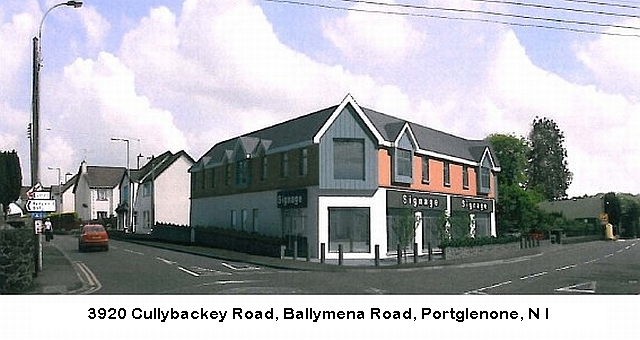 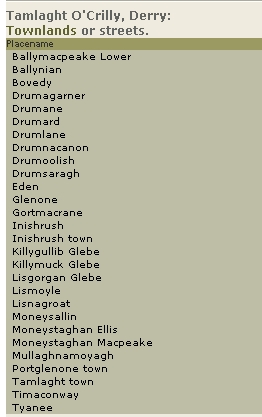 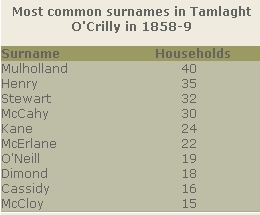 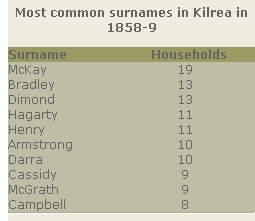 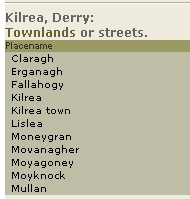 OTHER PARTS OF NORTHERN IRELAND:

SCENE FROM ALONG THE ANTRIM COAST

Hundreds of other photos of Northern Ireland